In the past, challenges related to the environment used to be the work of specific sectors and organisations. In recent decades, climate change and planetary boundaries have become a concern for organisations beyond the environmentalists (Bond 2015), as the effects of its changes impact on every area of our existence.

Crossing certain environmental thresholds will induce irreversible disruptions. In 2009 a team of 28 scientists presented the concept of planetary boundaries.[1] Outside these contours there would be an increasing risk of irreversible and abrupt environmental change.The group identified nine vital categories and indicated that humanity has already overstepped the boundaries in three categories: climate change, biodiversity loss and interference with the nitrogen and phosphorus cycles. 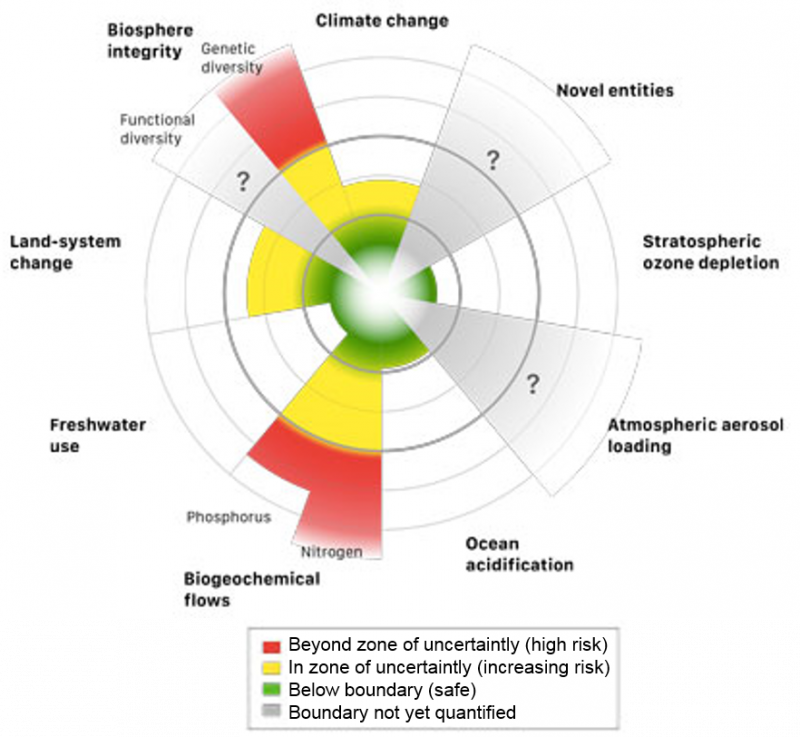 The traditional linear economic growth model, based on the consumption of fossil energy, is not sustainable. Furthermore, nature conservation as a whole is often made subservient to economic development, which amounts to biodiversity loss, depletion of water reserves and other natural resources and air pollution.

The evolution of how our development model contributes to the transgression of planetary boundaries can best be illustrated by the models of the ‘great acceleration’. These graphs illustrate how the acceleration of the impact of human activity induced accelerated reaction of the earth system.

Image: Estimates of how the different control variables for seven planetary boundaries have changed from 1950 to present. The green shaded polygon represents the safe operating space. Source: Steffen et al. 2015 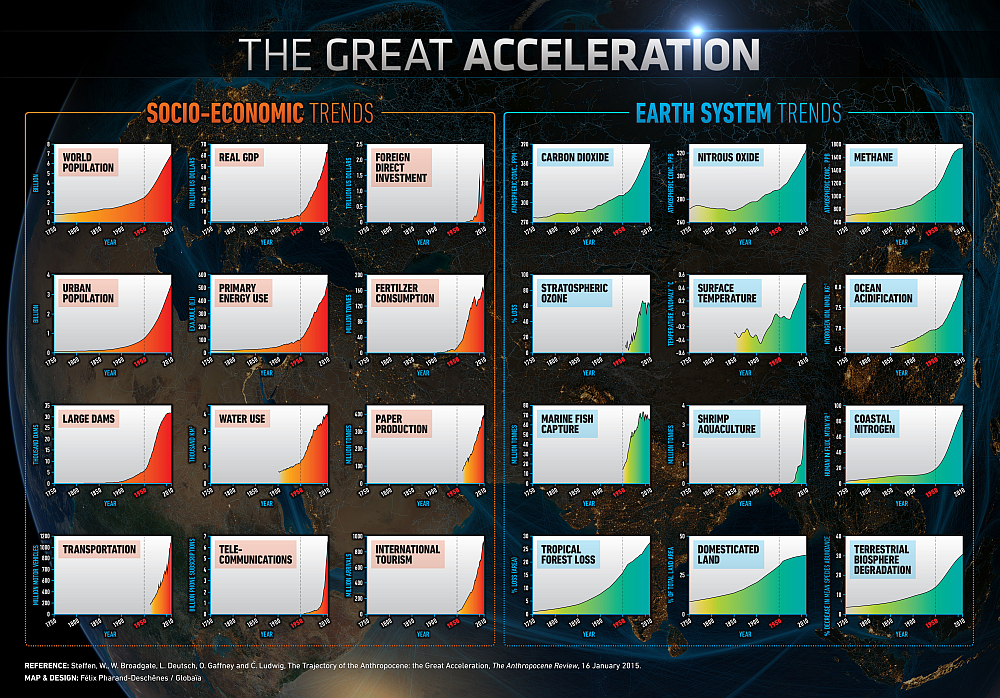 Imagining the future of international development today is difficult in isolation from the sketched planetary boundaries and the impact of our economic model of growth on the natural environment.

Environmental change impacts on other domains of society.
It generates both physical as well as societal impacts in fields in which international development is active, such as agriculture, migration, health safety, ...
The physical impacts of climate change are, amongst others:

Some of the human impacts of climate change are:

The impact of environmental and climate change is uneven. Environmental red lines concern us all, but they threaten in particular the resilience of the most marginalised people in society, regardless of the development level of the country. At the same time, countries most vulnerable to climate change are all situated in sub-sahara Africa and the Caribbean[7]. The climate change agenda “produces stark numbers. The number of deaths caused by climate change has been projected to rise from 400,000 in 2012 to close to 700,000 annually by 2030, with over 98% of these deaths occurring in developing countries”.[8] The true cost of adapting to climate change in developing countries could range between $140 and $300 billion per year in 2030, and between $280 and $500 billion per year in 2050.[9]

Given these multifold challenges, it is necessary to adapt, across fields from spatial and infrastructure planning and urbanisation to food security, public health and disaster relief. As NGOs we must collectively secure our ability to support adaptation and climate-induced natural disaster relief, including through rapid deployment of resources, and to add weight to climate mitigation efforts at all levels.

As a consequence, environmental challenges pose a daunting question with regard to the priorities and approach of development cooperation. On the one hand, we must be conscious of the fact that climate change can annul centuries of efforts at the level of development. On the other hand it poses the question how we will secure that rapid economic development worldwide takes the form of sustainable development. To give an example, how will we assure that one and a half billion people that have no access to energy at the moment will instantly make the leap to clean energy?

More fundamentally this puts into question the ideological underpinnings of linear development. Hence, the shift from MDG’s to SDG’s where the focus on sustainability is prominently put forward in the attempt to achieve crucial development goals. Another example is the attempt to integrate the idea of self-governance arrangements and communal management (the commons) in development cooperation instead of focusing on privatization.[10]